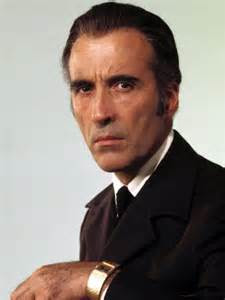 Aside from being one of the finest actors the world has ever known, Sir Christopher Frank Carandini Lee was (there's just no better way to express it) a badass.

At 6'5", he spoke six languages, engaged in more sword fights than any other movie actor and is the oldest (award-winning) heavy metal vocalist ever at 91. He was apparently the most prolific actor in motion picture history (281 roles), the son of an Italian Countess descended from the line of King Charlemagne, and of a WWI war hero related to American Civil War General Robert E. Lee.

In 1939, Christopher Lee volunteered to fight for the Finnish government, and upon the death of his father volunteered for the Royal Air Force. As a codebreaker in North Africa, he helped bring about the 1943 North African surrender of the Axis.

Lee acted in screen adaptations of the greatest stories of all time: The Three Musketeers, Robin Hood, Dracula, Star Wars, James Bond, The Lord of the Rings, Sherlock Holmes, Hamlet, Charlie and the Chocolate Factory, Alice in Wonderland, and many more.

As an interesting bit of trivia, Lee also hobnobbed with many other greats - you can find him on the cover of Paul McCartney's album Band On The Run, where he's dressed as one of several convicts caught by a searchlight (alongside McCartney, the band, and actor James Coburn). As a master golfer, he's played against Jack Nicklaus. He even met J.R.R. Tolkein in an Oxford pub called the Eagle and Child, and found himself so starstruck that all he could say was "How do you do?"

Lee was apparently a huge fan of the author's work (which he read in its original 1953 prio\nting), and said in an interview with Cinefantastique magazine:

"Members of the [Lord of the Rings] cast and crew were always trying to catch me out. They'd ask me questions like, 'What was the name of Frodo's father,' or, 'What was the name of this or that sword.' Things like that. Well, they never caught me out -- not once! They tried, but they never did."
"I still think the Lord of the Rings is the greatest literary achievement in my lifetime," he said.

Millions around the world will doubtless agree Sir Christopher Lee was the greatest actor of his time.

Sources: "Christopher Lee was a Nazi hunter and other badass things you didn't know about cinema's biggest villain", Philippa Hawker, The Age;"Sir Christopher Lee on The Lord of the Rings trilogy", Lawrence French, Cinefantastique;
IMDB; Wikipedia; "One Reason Christopher Lee Was Perfect For 'Lord Of The Rings'", Todd Van Luling, The Huffington Post
Posted by Unknown at 11:19 PM